Cabell Calloway III (December 25, 1907 – November 18, 1994) was an American jazz singer, dancer, and bandleader. He was strongly associated with the Cotton Club in Harlem, New York City, where he was a regular performer.

Calloway was a master of energetic scat singing and led one of the United States’ most popular big bands from the start of the 1930s to the late 1940s. Calloway’s band featured performers including trumpeters Dizzy Gillespie and Adolphus “Doc” Cheatham, saxophonists Ben Webster and Leon “Chu” Berry, New Orleans guitarist Danny Barker, and bassist Milt Hinton. Calloway continued to perform until his death in 1994 at the age of 86. 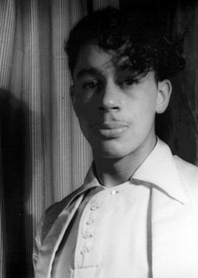 Calloway was born in Rochester, New York, on Christmas Day in 1907 to an African American upper-middle-class family. His mother, Martha Eulalia Reed, was a Morgan State College graduate, teacher, and church organist. His father, Cabell Calloway, Jr., graduated from Lincoln University of Pennsylvania in 1898, and worked as a lawyer and in real estate. The family moved to Baltimore, Maryland, when Cab was 11.

Cab Calloway grew up as an adolescent in a middle-class household in West Baltimore’s Sugar Hill area, considered the political, cultural and business hub of black society. Early on, his parents recognized their son’s musical talent, and he began private voice lessons in 1922. He continued to study music and voice throughout his formal schooling. Despite his parents’ and teachers’ disapproval of jazz, Calloway began frequenting and performing in many of Baltimore’s nightclubs. As a result, he came into contact with many of the local jazz luminaries of the time. He counted among his early mentors drummer Chick Webb and pianist Johnny Jones.

Calloway attended Frederick Douglass High School. He played basketball, at the guard position, both for the high school and for the professional Baltimore Athenians team. He graduated in 1925.

After graduation Calloway joined his older sister, Blanche, in a touring production of the popular Black musical revue, Plantation Days. (Blanche Calloway became an accomplished bandleader before her brother did, and he would often credit her as his inspiration for entering show business). His parents had hopes of their son becoming an attorney following after his father, so Calloway enrolled at Crane College in Chicago. His main interest, however, was in singing and entertaining, and he spent most of his nights at Chicago’s Dreamland Ballroom, the Sunset Cafe, and the Club Berlin, performing as a drummer, singer and MC. At the Sunset Café, Calloway cut his teeth as an understudy for singer Adelaide Hall. Here he met and performed with Louis Armstrong, who taught him to sing in the “scat” style. He eventually left school to sing with a band called the Alabamians.

In 1930 Calloway took over a band called “The Missourians“; later on, they renamed it “Cab Calloway and His Orchestra”. The Cotton Club was the premier jazz venue in the country. In 1931 Calloway and his orchestra were hired as a replacement for the Duke Ellington Orchestra while it was touring. (Calloway’s group had joined Duke Ellington and Mills Blue Rhythm Band as another of the jazz groups handled by Irving Mills.)

Calloway quickly proved so popular that his band became the “co-house” band with Ellington’s, and his group began touring nationwide when not playing the Cotton Club. Their popularity was greatly enhanced by the twice-weekly live national radio broadcasts on NBC from the Cotton Club. Calloway also appeared on Walter Winchell‘s radio program and with Bing Crosby in his show at New York’s Paramount Theatre. As a result of these appearances, Calloway, together with Ellington, broke the major broadcast network color barrier.

Like other bands fronted by a singing bandleader, Calloway initially gave ample soloist space to its lead members and, through the varied arrangements of Walter “Foots” Thomas, provided much more in the way of musical interest. Many of his records were “vocal specialties” with Calloway’s vocals taking up the majority of the record.

In 1931 Calloway recorded his most famous song, “Minnie the Moocher.” That song, along with “St. James Infirmary Blues” and “The Old Man of the Mountain,” were performed for the Betty Boop animated shorts, Minnie the Moocher (1932), Snow White (1933), and The Old Man of the Mountain(1933), respectively. Through rotoscoping, Calloway performed voiceover for these cartoons, and his dance steps were the basis of the characters’ movements. He took advantage of this, timing concerts in some communities to coincide with the release of the films in order to make the most of the publicity.

As a result of the success of “Minnie the Moocher,” Calloway became identified with its chorus, gaining the nickname “The Hi De Ho Man.” He also performed in the 1930s in a series of short films for Paramount. (Calloway’s and Ellington’s groups were featured on film more than any other jazz orchestras of the era.) In these films, Calloway can be seen performing a gliding back-step dance move, which some observers have described as the precursor to Michael Jackson‘s “moonwalk.” Calloway said 50 years later, “it was called The Buzz back then.” The 1933 film International House featured Calloway performing his classic song, “Reefer Man”, a tune about a man who favors marijuana cigarettes.

Calloway made his “first proper Hollywood movie appearance” opposite Al Jolson in The Singing Kid in 1936. He sang a number of duets with Jolson, and the film included Calloway’s band and cast of 22 Cotton Club dancers from New York. According to music historian Arthur Knight, the film aimed in part “to both erase and celebrate boundaries and differences, including most emphatically the color line.” He also notes that “when Calloway begins singing in his characteristic style – in which the words are tools for exploring rhythm and stretching melody – it becomes clear that American culture is changing around Jolson and with (and through) Calloway.” 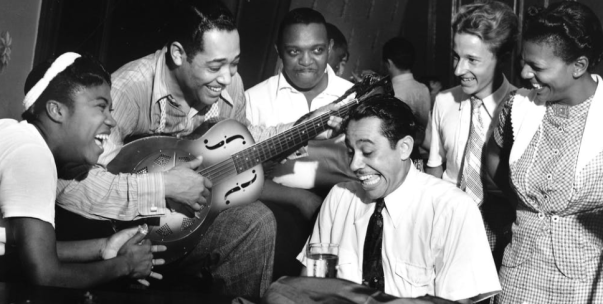 Calloway’s was one of the most popular American jazz bands of the 1930s, recording prolifically for Brunswick and the ARC dime store labels (Banner, Cameo, Conqueror, Perfect, Melotone, Banner, Oriole, etc.) from 1930 to 1932, when he signed with RCA Victor for a year. He was back on Brunswick in late 1934 through 1936, when he signed with manager Irving Mills’s short-lived Variety in 1937. He stayed with Mills when the label collapsed during the Great Depression. Their sessions were continued on Vocalion through 1939, and then OKeh Records through 1942. After an AFM recording ban due to the 1942-44 musicians’ strike ended, Calloway continued to record prolifically.

Calloway’s vocal style is a blend of hot scat singing and improvisation, coupled with a very traditional vaudeville-like singing style. Many of his ballads are devoid of tone-bending jazz styling.

In 1941 Calloway fired Dizzy Gillespie from his orchestra after an onstage fracas erupted when Calloway was hit with spitballs. He wrongly accused Gillespie, who stabbed Calloway in the leg with a small knife.

In 1943 Calloway appeared in the high-profile 20th Century Fox musical film Stormy Weather. Stormy Weather was one of the first films that featured an all-star black cast.

In 1944 The New Cab Calloway’s Hepsters Dictionary: Language of Jive was published, an update of an earlier book in which Calloway set about translating jive for fans who might not know, for example, that “kicking the gong around” was a reference to smoking opium.

Calloway and his band starred in Hi-De-Ho (1947), an all-black full-length film directed by Josh Binney. Caricatures of Calloway appeared in the Porky Pig cartoons Porky at the Crocadero and Swooner Crooner.

In the late 1940s, Calloway wrote a regular humorous pseudo-gossip column called “Coastin’ With Cab” for Song Hits Magazine. It was a collection of celebrity snippets such as the following in the May 1946 issue: “Benny Goodman was dining at Ciro’s steak house in New York when a very homely girl entered. ‘If her face is her fortune,’ Benny quipped, ‘she’d be tax-free’.” In the late 1940s, however, Cab Calloway’s bad financial decisions as well as his gambling caused his band to break up.

During the late 1940s, Calloway lived with his wife Zulme “Nuffie” and family in Long Beach on the South Shore of Long Island, New York on the border with neighboring Lido Beach. In the 1950s, Calloway moved his family to Westchester County, New York, where he and Nuffie raised their daughters Chris, Cecelia (Lael), and Cabella Calloway.

In his later career, Calloway appeared in a number of films and stage productions that used both his acting and singing talents. In 1952, he played the prominent role of “Sportin’ Life” in a production of the Gershwin opera, Porgy and Bess, with William Warfield and Leontyne Price as the title characters. Another notable role was “Yeller” in The Cincinnati Kid (1965), with Steve McQueen, Ann-Margret, and Edward G. Robinson.

One of Cab Calloway’s zoot suits went on display in Baltimore’s City Hall, in October 2007.

Calloway appeared on The Ed Sullivan Show on March 19, 1967, with his daughter Chris Calloway. In 1967, Calloway co-starred opposite Pearl Bailey as Horace Vandergelder in an all-black cast change of Hello, Dolly! on Broadway during its original run. Chris Calloway also joined the cast as Minnie Fay. The new cast revived the flagging business for the show and RCA Victor released a new cast recording, rare for the time. In 1973–74, Calloway was featured in an unsuccessful Broadway revival of The Pajama Game alongside Hal Linden and Barbara McNair.

His autobiography, Of Minnie the Moocher and Me (Crowell), was published in 1976. It included his complete Hepsters Dictionary as an appendix.

Renewed interest in Calloway occurred in 1980 when he appeared in the hit film The Blues Brothers, performing “Minnie the Moocher.” He also sang “The Jumpin’ Jive” with the Two-Headed Monster on the children’s TV series Sesame Street. This also was the year the cult movie Forbidden Zone was released, which included rearrangements of, and homages to, Calloway songs written by Calloway fan Danny Elfman, performed by Elfman and his band, The Mystic Knights of the Oingo Boingo.

In 1985, Cab and his Orchestra appeared at The Ritz London Hotel where he was filmed for a 60-minute BBC TV show called The Cotton Club comes to the Ritz; Adelaide Hall, Doc Cheatham, Max Roach, and the Nicholas Brothers also appeared on the bill.

In 1986, Calloway appeared at World Wrestling Entertainment (WWE)’s WrestleMania 2 as a guest judge for a boxing match between Rowdy Roddy Piper and Mr. T; it took place at the Nassau Coliseum. Also in 1986, Calloway headlined to great success a gala ball for 4,000 celebrating the grand opening of the Rosewood Hotel Co.’s Hotel Crescent Court in Dallas, Texas. A performance with the Cincinnati Pops Orchestra directed by Erich Kunzel in August 1988 was recorded on video and features a classic presentation of “Minnie the Moocher,” 57 years after he first recorded it.

In 1990, he was the focus of Janet Jackson‘s 1930s-themed music video “Alright“, and he made a cameo appearance playing himself. In the United Kingdom, Calloway appeared in several commercials for the Hula Hoops snack, both as himself and as a voice for a cartoon (in one of these commercials he sang his hit “Minnie The Moocher”). He also made an appearance at the Apollo Theatre.

Cab enjoyed his final years as a celebrated and well-loved member of a retirement community in northern Delaware (between, and short train rides from, his beloved Baltimore and New York City). In 1994, a creative and performing arts school, the Cab Calloway School of the Arts, was dedicated in his name in Wilmington, Delaware.

On June 12, 1994, Calloway suffered a severe stroke. He died five months later on November 18, 1994, at age 86. His body was cremated and his ashes were given to his family. Upon the death of his wife Zulme “Nuffie” Calloway on October 13, 2008, his ashes were interred next to her in the Rosewood mausoleum at Ferncliff Cemetery in Hartsdale, New York.

A profile of Calloway, Cab Calloway: Sketches, aired on the PBS program American Masters in February 2012.