Jane Wyman (born Sarah Jane Mayfield; January 5, 1917 – September 10, 2007) was an American singer, dancer, and film/television actress. She began her film career in the 1932 and her work in television lasted into 1993. She was considered a prolific performer for two decades. She received an Academy Award for Best Actress for her performance in Johnny Belinda (1948), and later in life achieved a new level of success in the 1980s as the aging wine country matriarch Angela Channing on Falcon Crest.

Wyman was born in St. Joseph, Missouri. Although her birth date has been widely reported for many years as January 4, 1914, research by biographers and genealogists indicates she was born on January 5, 1917. The most likely reason for the 1914 year of birth is that she added to her age so as to be able to work and act while still a minor. She may have moved her birthday back by one day to January 4 so as to share the same birthday as her daughter, Maureen (born January 4, 1941). The 1920 census, on the other hand, has her at 3 and living in Philadelphia, Pa. After Wyman’s death, a release posted on her official website confirmed these details.

Her parents were Manning Jefferies Mayfield (c.1885–1922), a meal-company laborer, and Gladys Hope Christian (c.1891–1960), a doctor’s stenographer and office assistant. In October 1921, her mother filed for divorce, and her father died unexpectedly the following year at age 37. After her father’s death, her mother moved to Cleveland, Ohio, leaving her to be reared by foster parents, Emma (1866–1951) and Richard D. Fulks (1862–1928), the chief of detectives in Saint Joseph. She took their surname unofficially, including in her school records and, apparently, her first marriage certificate.

Her unsettled family life resulted in few pleasurable memories. Wyman later said, “I was raised with such strict discipline that it was years before I could reason myself out of the bitterness I brought from my childhood. In 1928, aged 11, she moved to southern California with her foster mother, but it is not known for certain if she attempted a career in motion pictures at this time, or if the relocation was due to the fact that some of Fulks’ children also lived in the area. In 1930, the two moved back to Missouri, where Sarah Jane attended Lafayette High School in Saint Joseph. That same year she began a radio singing career, calling herself “Jane Durrell” and adding years to her birth date to work legally since she would have been under age.

After dropping out of Lafayette in 1932, at age 15, she returned to Hollywood, taking on odd jobs as a manicurist and a switchboard operator, before obtaining small parts in such films as The Kid from Spain (as a “Goldwyn Girl”; 1932), My Man Godfrey (1936) and Cain and Mabel (1936). After changing her name from Jane Durrell to Jane Wyman, she began her career as a contract player with Warner Bros. in 1936 at age 19. Her big break came the following year, when she received her first starring role in Public Wedding.

In 1939, Wyman starred in Torchy Plays With Dynamite. In 1941, she appeared in You’re in the Army Now, in which she and Regis Toomey had the longest screen kiss in cinema history: 3 minutes and 5 seconds. 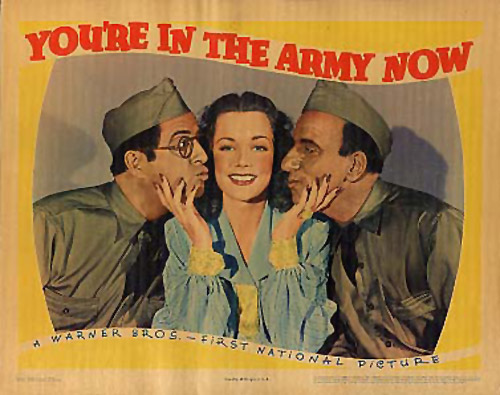 Wyman finally gained critical notice in the film noir The Lost Weekend (1945). She was nominated for the 1946 Academy Award for Best Actress for The Yearling (1946), and won two years later for her role as a deaf-mute rape victim in Johnny Belinda (1948). She was the first person in the sound era to win an acting Oscar without speaking a line of dialogue. In an amusing acceptance speech, perhaps poking fun at some of her long-winded counterparts, Wyman took her statue and said only, “I accept this, very gratefully, for keeping my mouth shut once. I think I’ll do it again.” The Oscar win gave her the ability to choose higher profile roles, although she still showed a liking for musical comedy. She worked with such directors as Alfred Hitchcock on Stage Fright (1950), Frank Capra on Here Comes the Groom (1951) and Michael Curtiz on The Story of Will Rogers (1952). She starred in The Glass Menagerie (1950), Just for You (1952), Let’s Do It Again (1953), The Blue Veil (1951) (another Oscar nomination), the remake of Edna Ferber‘s So Big (1953), Magnificent Obsession (1954) (Oscar nomination), Lucy Gallant (1955), All That Heaven Allows (1955), and Miracle in the Rain (1956). She replaced the ailing Gene Tierney in Holiday for Lovers (1959), and next appeared in Pollyanna (1960), Bon Voyage! (1962), and her final big screen movie, How to Commit Marriage (1969).

Her first guest-starring television role was on a 1955 episode of General Electric Theater, a show hosted by her former husband Ronald Reagan. This appearance led to roles on Summer Playhouse, Lux Playhouse, Westinghouse Desilu Playhouse, Checkmate, The Investigators, and Wagon Train. She guest starred in 1959 on The Ford Show, Starring Tennessee Ernie Ford on NBC. She was hostess of The Bell Telephone Hour and Bob Hope Presents The Chrysler Theatre. She had telling roles in both The Sixth Sense and Insight, among other programs.

She hosted an anthology television series, Jane Wyman Presents the Fireside Theater, for which she was nominated for an Emmy Award in 1957. During her tenure as host, however, ratings steadily declined, and the show ended after three seasons. She was later cast in two unsold pilots during the 1960s and 1970s. After those pilots were not picked up, Wyman went into semi-retirement and remained there for most of the 1970s, although she did make guest appearances on Charlie’s Angels and The Love Boat.

In the spring of 1981, Wyman’s career enjoyed a resurgence when she was cast as the scheming Californian vintner and matriarch Angela Channing in The Vintage Years, which was retooled as the primetime soap opera Falcon Crest. The series, which ran from December 1981 to May 1990, was created by Earl Hamner, who had created The Waltons a decade earlier. Also starring on the show was an already established character actress, Susan Sullivan, as Angela’s niece-in-law, Maggie Gioberti, and the relatively unknown actor Lorenzo Lamas as Angela’s irresponsible grandson, Lance Cumson. The on- and off-screen chemistry between Wyman and Lamas helped fuel the series’ success. In its first season, Falcon Crest was a ratings hit, behind other 1980s prime-time soap operas, such as Dallas and Knots Landing, but initially ahead of rival soap opera Dynasty. Cesar Romero appeared from 1985 to 1987 on Falcon Crest as the romantic interest of Angela Channing. 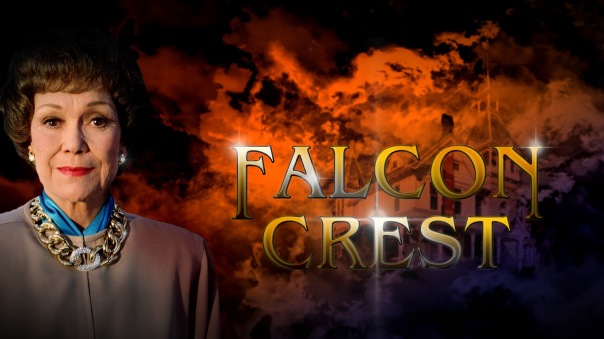 For her role as Angela Channing, Wyman was nominated for a Soap Opera Digest Award five times (for Outstanding Actress in a Leading Role and for Outstanding Villainess: Prime Time Serial), and was also nominated for a Golden Globe Award in 1983 and 1984. Her 1984 Golden Globe nomination resulted in a win for Wyman, who took home the award for Best Performance By an Actress in a TV Series. Later in the show’s run, Wyman suffered several health problems. In 1986, she had abdominal surgery which caused her to miss two episodes (her character simply “disappeared” under mysterious circumstances). In 1988, she missed another episode due to ill health and was told by her doctors to avoid work. However, she wanted to continue working, and she completed the rest of the 1988-1989 season while her health continued to deteriorate. Months later in 1989, Wyman collapsed on the set and was hospitalized due to problems with diabetes and a liver ailment. Her doctors told her that she should end her acting career. Wyman was absent for most of the ninth and final season of Falcon Crest in 1989-1990 (her character was written out of the series by making her comatose in a hospital bed following an attempted murder).

Against her doctor’s advice, she returned for the final three episodes in 1990, even writing a soliloquy for the series finale. Wyman ultimately appeared in almost every episode up until the beginning of the ninth and final season, for a total of 208 of the show’s 227 episodes. After Falcon Crest, Wyman acted only once more, playing Jane Seymour‘s screen mother in a 1993 episode of Dr. Quinn, Medicine Woman. Following this, she retired from acting permanently. Wyman had starred in 83 movies, two successful TV series, and was nominated for an Academy Award four times, winning once.

Wyman spent her retirement painting and entertaining friends. A recluse, she made only a few public appearances in her last years in part due to suffering from diabetes and arthritis, although she did attend her daughter Maureen’s funeral in 2001 after the latter’s death from cancer. (Ronald Reagan was unable to attend due to his Alzheimer’s disease). She also attended the funeral of her long-time friend Loretta Young in 2000. Wyman broke her silence about her ex-husband upon his death in 2004, attending his funeral and issuing an official statement that read “America has lost a great president and a great, kind, and gentle man.”

Wyman died at the age of 90 at her Rancho Mirage home on September 10, 2007. Wyman’s son, Michael Reagan, released a statement saying: I have lost a loving mother, my children Cameron and Ashley have lost a loving grandmother, my wife Colleen has lost a loving friend she called Mom and Hollywood has lost the classiest lady to ever grace the silver screen.

It was reported that Wyman died in her sleep of natural causes. A member of the Dominican Order (as a lay tertiary) of the Roman Catholic Church, she was buried in a nun’s habit. She was interred at Forest Lawn Mortuary and Memorial Park in Cathedral City, California.

Wyman has two stars on the Hollywood Walk of Fame; one for motion pictures at 6607 Hollywood Boulevard and one for television at 1620 Vine Street.