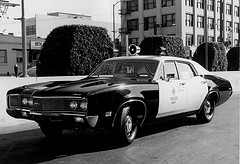 The LAPD’s ‘Freeway Flyer’ program, cars specially equipped for freeway use,  was disbanded when the Highway Patrol took over the freeways through L.A. in 1969. The cars’  lights were made by S&M Lamp Co. LA (Model 757) until 1964, first used in 1951 & standard by 1953, when S&M Lamp Co. went out of business. In ’64, Trio-Sales Co. started making them for LAPD (renamed Model T-2). The lights were red/red until ’64, when rear ambers were introduced. Each T-2 had a separate flasher installed by MTD so that a ‘shop’ would not go out-of-service for a BO amber. Last cars to have the T-2 lights installed were the ’78 Plymouth Fury models. 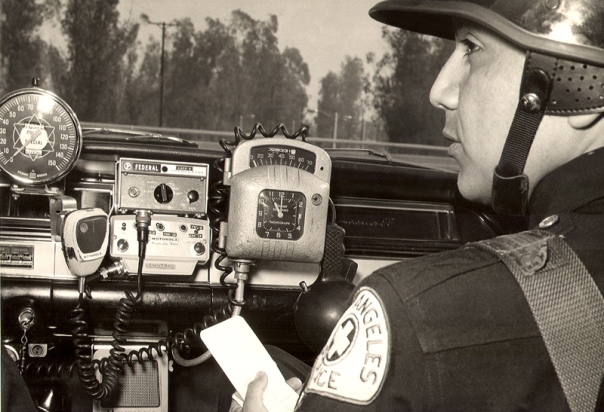 Most sirens were the familiar Federal C5GB, B&M S8B-S, or B&M Super Chief. 2. In those days all units were dispatched using an AM signal-1730 Mhz, just off the end of the AM broadcast dial. A good home console radio could be tuned to it. There would be a 39″ stick antenna just out of frame on the left-rear quarter panel for the receiver. Units transmitted with an FM signal in the 155 Mhz range. Because of this there were no tac (tactical) channels for patrol units and every car in the city heard the same dispatch broadcasts. Obviously, this changed very quickly after the Watts riots. The FM transmit antenna was typically a Motorola TU-316, the same one used in the Belvedere days of Adam-12.