Yul Brynner (b. July 11, 1920, d. October 10, 1985) was a Russian-born American stage and film actor. He was best known for his portrayal of the King of Siam in the Rodgers and Hammerstein musical The King and I, for which he won two Tony Awards and an Academy Award for the film version; he played the role 4,625 times on stage. He is also remembered as Rameses II in the 1956 Cecil B. DeMille blockbuster The Ten Commandments, General Bounine in the 1956 film Anastasia, and Chris Adams in The Magnificent Seven. Brynner was noted for his distinctive voice and for his shaved head, which he maintained as a personal trademark long after adopting it in 1951 for his role in The King and I. Earlier, he was a model and television director, and later a photographer and the author of two books.

Yul Brynner was born Yuliy Borisovich Briner in 1920. He exaggerated his background and early life for the press, claiming that he was born Taidje Khan of part-Mongol parentage, on the Russian island of Sakhalin. In reality, he was born at home in a four-story residence at 15 Aleutskaya Street, Vladivostok, in the Far East Russian Republic (present-day Primorsky Krai, Russia). He also occasionally referred to himself as Julius Briner, Jules Bryner, or Youl Bryner. A 1989 biography by his son, Rock Brynner, clarified these issues.

During World War II, Brynner worked as a French-speaking radio announcer and commentator for the U.S. Office of War Information, broadcasting propaganda to occupied France. At the same time, he studied acting in Connecticut with the Russian teacher Michael Chekhov. Brynner’s first Broadway performance was a small part in Shakespeare’s Twelfth Night in December 1941. Brynner found little acting work during the next few years, but among other acting stints, he co-starred in a 1946 production of Lute Song with Mary Martin. He also did some modeling work and was photographed nude by George Platt Lynes.

Brynner married his first wife, actress Virginia Gilmore, in 1944, and soon after began working as a director at the new CBS television studios, directing Studio One, among other shows. In 1949, he made his film debut in Port of New York, his only film with his natural head of hair. The next year, at the urging of Martin, he auditioned for Rodgers and Hammerstein’s new musical in New York. He recalled that, as he was finding success as a director on television, he was reluctant to go back on the stage. Once he read the script, however, he was fascinated by the character of the King and was eager to do the project. 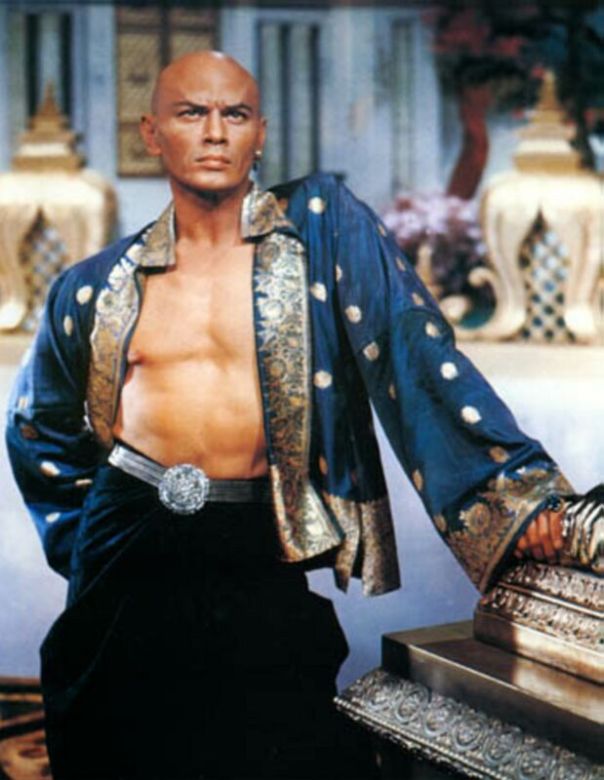 His best-known role remains that of King Mongkut of Siam in The King and I in which he played 4,625 times on stage over the span of his career. He appeared in the original 1951 production and later touring productions as well as a 1977 Broadway revival, a London Production in 1979 and another Broadway revival in 1985. He won Tony Award for both the first and the last of these Broadway productions. He also appeared in the 1956 film version, for which he won an Academy Award as Best Actor and in a short-lived TV version (Anna and the King) on CBS in 1972. Brynner is one of only nine people who have won both a Tony Award and an Academy Award for the same role. His connection to the story and the role of King Mongkut is so deep that he was mentioned in the song “One Night in Bangkok” from the 1984 musical Chess whose second act is set in Bangkok.

In 1951 Brynner shaved his head for his role in The King and I. Following the huge success of the Broadway production and subsequent film, Brynner continued to shave his head for the rest of his life, though he would sometimes wear a wig for certain roles. Brynner’s shaved head was unusual at the time, and his striking appearance helped to give him an iconic appeal. Some fans shaved off their hair to emulate him, and a shaved head was often referred to as the “Yul Brynner look.” 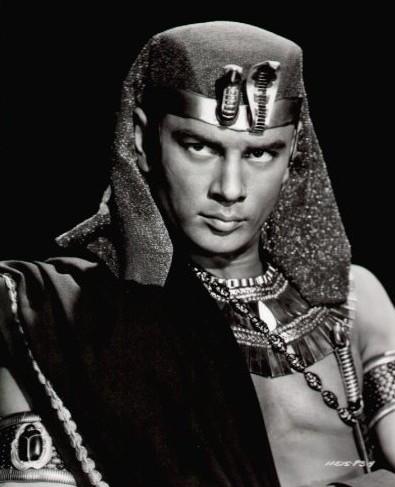 Brynner made an immediate impact upon launching his mainstream film career in 1956 and quickly gained superstar status after appearing not only in The King and I that year but also in starring roles in The Ten Commandments, and Anastasia with Ingrid Bergman. Brynner, at 5’10”, was reportedly concerned about being overshadowed by co-star Charlton Heston’s height and physical presence in The Ten Commandments and prepared his impressive physique seen in the film with an intensive weight-lifting program.

He appeared in more than 40 other films over the next two decades, including the epic Solomon and Sheba (1959), The Magnificent Seven (1960), Taras Bulba (1962) and Kings of the Sun (1963). He co-starred with Marlon Brando in Morituri (1965), Katharine Hepburn in The Madwoman of Chaillot (1969) and Lee J. Cobb in a film version of The Brothers Karamazov (1958). He played the titular role of The Ultimate Warrior (1975) and starred with Barbara Bouchet in Death Rage (1976). Among his final feature film appearances were in Michael Crichton’s Westworld (1973) and its sequel Futureworld (1976). Brynner also appeared in drag (as a torch singer) in an unbilled role in the Peter Sellers comedy The Magic Christian (1969).

In addition to his work as a director and performer, Brynner was an active photographer and wrote two books. His daughter Victoria put together Yul Brynner: Photographer (ISBN 0-8109-3144-3) a collection of his photographs of family, friends, and fellow actors, as well as those he took while serving as a UN special consultant on refugees. Brynner wrote Bring Forth the Children: A Journey to the Forgotten People of Europe and the Middle East (1960), with photographs by himself and Magnum photographer Inge Morath, and also The Yul Brynner Cookbook: Food Fit for the King and You.

A student of music from childhood, Brynner was an accomplished guitarist. In his early period in Europe he often played and sang gypsy songs in Parisian nightclubs with Aliosha Dimitrievitch. He sang some of those same songs in the film The Brothers Karamazov. In 1967 he and Dimitrievitch released a record album The Gypsy and I: Yul Brynner Sings Gypsy Songs (Vanguard VSD 79265).

He and his first wife, actress Virginia Gilmore (1944–1960), had one child, Rock Yul Brynner, born on December 23, 1946. His father nicknamed him “Rock” when he was six years old in honor of boxer Rocky Graziano. Rock is a historian, novelist, and university history lecturer at Marist College in Poughkeepsie, New York and Western Connecticut State University in Danbury, Connecticut. In 2006, Rock wrote a book about his father and his family history titled Empire and Odyssey: The Brynners in Far East Russia and Beyond. Rock regularly returns to Vladivostok, the city of his father’s birth, for the “Pacific Meridian” Film Festival. Yul Brynner had a long affair with Marlene Dietrich, who was 19 years his senior, during the first production of The King and I.

Brynner’s daughter Lark Brynner was born out of wedlock in 1959 and raised by her mother, Frankie Tilden, who was 20 years old when Lark was born. Brynner supported her financially. His second wife, from 1960 to 1967, Doris Kleiner, was a Chilean model whom he married on the set during shooting of The Magnificent Seven in 1960. They had one child, Victoria Brynner (born November 1962), whose godmother was Audrey Hepburn.

His third wife, Jacqueline Thion de la Chaume (1971–1981), was a French socialite, the widow of Philippe de Croisset (he was the son of French playwright Francis de Croisset and a publishing executive). Brynner and Jacqueline adopted two Vietnamese children: Mia (1974) and Melody (1975). The first house that he ever owned was the Manoir de Criqueboeuf, a sixteenth-century manor house that he and Jacqueline purchased. His 1980 announcement that he would continue in the role of the King for another long tour and Broadway run, together with his affairs with female fans and his neglect of his wife and children, broke up their marriage.

At the age of 63, he married his fourth wife, Kathy Lee, a 24-year-old ballerina from a small town in Malaysia whom he had met in a production of The King and I in which she had a small dancing role. They remained married for the last 2 years (1983–1985) of Brynner’s life.

Brynner, a Swiss citizen, was naturalized as a US citizen, but in June 1965, he renounced his US citizenship at the US Embassy in Berne, Switzerland for tax reasons. He had lost his tax exemption as an American resident abroad by working too long in the U.S. and would have been bankrupted by his tax and penalty debt. 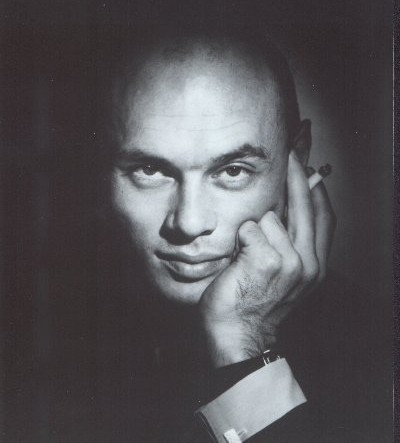 Brynner began smoking heavily at age 12, and his promotional photos almost always showed him with a cigarette in his hand, but he quit in 1971. In September 1983, Brynner found a lump on his vocal cords. In Los Angeles, only hours before his 4,000th performance in The King and I, he received the test results. His throat would be fine, but he had inoperable lung cancer. Brynner and the national tour of the musical were forced to take a few months off while he underwent radiation therapy, which hurt his throat and made it impossible for him to sing or speak easily. The tour then resumed.

In January 1985, nine months before his death, the tour reached New York for a farewell Broadway run. Aware he was dying, Brynner gave an interview on Good Morning America discussing the dangers of smoking and expressing his desire to make an anti-smoking commercial. The Broadway production of The King and I ran from January 7 to June 30 of that year, with Mary Beth Peil as Anna. His last performance marked the 4,625th time he had played the role of the King. Meanwhile, Brynner and the American Cancer Society created a public service announcement using a clip from the Good Morning America interview. Brynner died of lung cancer on October 10, 1985 in New York City on the same day as his Battle of Neretva co-star Orson Welles. Only a few days after his death, the public service announcement was showing on all the major U.S. television networks and was shown in many other countries around the world. He looked directly into the camera for 30 seconds, “His distinctive voice uttering one last haunting plea: ‘Now that I’m gone, I tell you: Don’t smoke. Whatever you do, just don’t smoke.’”

His remains are interred in France on the grounds of the Saint-Michel-de-Bois-Aubry Russian Orthodox monastery near Luzé between Tours and Poitiers.

On September 28, 2012, an eight-foot-tall statue was inaugurated at Yul Brynner Park, in front of the home where he was born at Aleutskaya St. No. 15 in Vladivostok, Russia. Created by local sculptor Alexei Bokiy, the monument was carved in granite from China. The grounds for the park were donated by the city of Vladivostok, which also paid additional costs. Vladivostok Mayor Igor Pushkariov, U.S. Consul General Sylvia Curran, and Rock Brynner participated in the ceremony, along with hundreds of city residents.

Brynner has a star on the Hollywood Walk of Fame at 6162 Hollywood Blvd.

The cottage at his childhood country home, at Sidimi near Vladivostok, is now a family museum.

In 1952, he received the Tony Award for Best Featured Actor in a Musical for his portrayal of the King of Siam in The King and I.

In 1985, he received a Special Tony Award honoring his 4,525 performances in The King and I.