After working as a fashion model in New York, Hayward traveled to Hollywood in 1937. She secured a film contract, and played several small supporting roles over the next few years.

By the late 1940s, the quality of her film roles had improved, and she achieved recognition for her dramatic abilities with the first of five Academy Award nominations for Best Actress for her performance as an alcoholic in Smash-Up, the Story of a Woman (1947). Her career continued successfully through the 1950s and she received subsequent nominations for My Foolish Heart (1949), With a Song in My Heart (1952) and I’ll Cry Tomorrow (1955). She finally won the Academy Award for Best Actress for her portrayal of death row inmate Barbara Graham in I Want to Live! (1958).

After Hayward’s second marriage and subsequent move to Georgia, her film appearances became infrequent, although she continued acting in film and television until 1972. She died in 1975 of brain cancer.

Hayward was born Edythe Marrenner inBrooklyn, the youngest of three children born to Ellen (née Pearson) and Walter Marrenner. Her paternal grandmother was an actress, Kate Harrigan, from County Cork, Ireland. Her mother was of Swedish descent. She had an older sister Florence (born May 1910) and an older brother Walter, Jr. (born December 1911).

Hayward was educated at Public School 181, and later attended The Girls’ Commercial High School (later renamed Prospect Heights High School). During her high school years, she acted in various school plays and was named “Most Dramatic” by her class. She graduated in June 1935.

Hayward began her career as a photographer’s model, going to Hollywood in 1937, aiming to secure the role of Scarlett O’Hara in Gone with the Wind. Although she did not win the role, Hayward found employment playing bit parts until she was cast in Beau Geste (1939) opposite Gary Cooper. During the war years, she acted with John Wayne twice, as a second lead in Reap the Wild Wind (1942), and as his leading lady in The Fighting Seabees (1944). She also starred in the film version of The Hairy Ape (1944). Later, in 1956, she was cast by Howard Hughes to play Bortai in the historical epic The Conqueror, as John Wayne’s leading lady.

In 1947, she received the first of five Academy Award nominations for her role as an alcoholic nightclub singer in Smash-Up, the Story of a Woman.

During the 1950s she won acclaim for her dramatic performances as President Andrew Jackson‘s melancholic wife in The President’s Lady (1953); the alcoholic actress Lillian Roth in I’ll Cry Tomorrow (1955), based on Roth’s best-selling autobiography of the same name, for which she received a Cannes award; and the real-life California murderer Barbara Graham in I Want to Live! (1958). Hayward’s portrayal of Graham won her the Academy Award for Best Actress. In 1959, she played the lead, Mary Sharron, in Woman Obsessed. 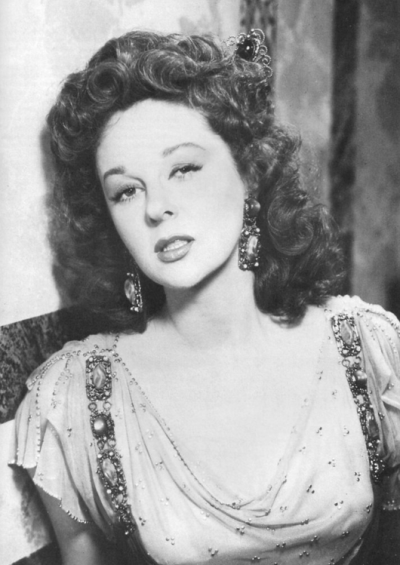 Though Hayward never truly became known as a singer because she hated her own singing, she acted out roles as singers in several films. In I’ll Cry Tomorrow, however, though a “ghost singer” was actually recruited, it is her own voice that is actually heard on the soundtrack. Susan Haward performed in the musical biography of Jane Froman in the 1952 film, With a Song in My Heart, a role that won her the Golden Globe for Best Actress Comedy film. Jane Froman’s voice was dubbed as Hayward acted out the songs.

In 1961, Hayward starred as a working girl who becomes the wife of the state’s next governor (Dean Martin) and ultimately takes over that office herself in Ada. The same year, she played Rae Smith in Ross Hunter‘s lavish remake of Back Street, which also starred John Gavin and Vera Miles. In 1967, Hayward replaced Judy Garland as Helen Lawson in the film adaptation of Jacqueline Susann‘s Valley of the Dolls. She received good reviews for her performance in a Las Vegas production of Mame, but left the production. She was replaced by Celeste Holm.

She continued to act into the early 1970s, when she was diagnosed with brain cancer. Her final film role was as Dr. Maggie Cole in the 1972 made-for-TV drama Say Goodbye, Maggie Cole. (The film was intended to be a pilot for a weekly television series, but because of Hayward’s cancer diagnosis and failing health, the series was never produced). Her last public appearance was at the Academy Awards telecast in 1974 to present the Best Actress award despite being very ill. With Charlton Heston‘s support, she was able to present the award. 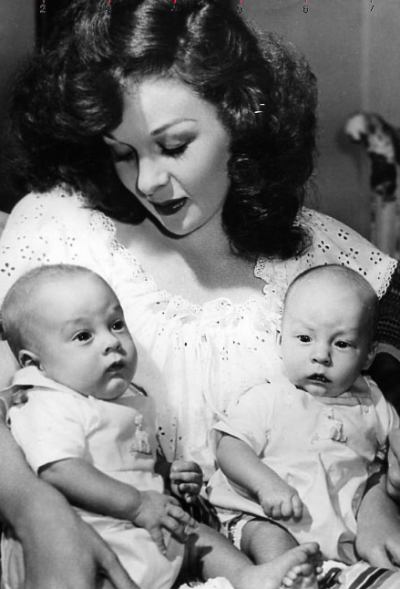 Hayward was married to actor Jess Barker for ten years and they had two children, fraternal twin sons named Gregory and Timothy, born February 19, 1945. The marriage was described in Hollywood gossip columns as turbulent. They divorced in 1954. Hayward survived a subsequent suicide attempt after the divorce. During the contentious divorce proceedings, Hayward felt it necessary to stay in the United States and not join the Hong Kong location shooting for the film Soldier of Fortune. She shot her scenes with co-star Clark Gable indoors in Hollywood. A few brief, distant scenes of Gable and a Hayward double walking near landmarks in Hong Kong were combined with the indoor shots.

In 1957, Hayward married Floyd Eaton Chalkley, commonly known as Eaton Chalkley. He was a Georgia rancher and businessman who had formerly worked as a federal agent. Though he was an unusual husband for a Hollywood movie star, the marriage was a happy one. She lived with him on a farm near Carrollton, Ga. The couple also owned property across the state line in Cleburne County, just outside of Heflin, Alabama. She became a popular figure in an area that in the 1950s was off the beaten path for most celebrities. In December 1964, she and her husband were baptized Catholic by Father McGuire at SS Peter and Paul’s Roman Catholic Church on Larimar Avenue, in the East Liberty section of Pittsburgh. She had met McGuire while in China and promised him that if she ever converted, he would be the one to baptize her. Chalkley died on January 9, 1966. Hayward went into mourning and did little acting for several years, and took up residence in Florida, because she preferred not to live in her Georgia home without her husband.

Hayward was a proponent of astrology. She particularly relied on the advice of Carroll Righter, who called himself “the Gregarious Aquarius” and the self-proclaimed “Astrologer to the Stars”, who informed her that the optimum time to sign a film contract was exactly 2:47 a.m., causing her to set her alarm for 2:45 so that she could be sure to obey his instructions.

Hayward was diagnosed with brain cancer in 1973. On March 14, 1975, she suffered a seizure in her Beverly Hills home and died at age 57. Her two sons survived her from Hayward’s marriage with Barker. Her funeral was held on March 16 at Our Lady of Perpetual Help Roman Catholic Church in Carrollton. Susan Hayward was buried in the church’s cemetery next to Chalkley.

There is speculation that Hayward may have developed cancer from radioactive fallout from atmospheric atomic bomb tests while making The Conqueror with John Wayne. Several production members, as well as Wayne himself, Agnes Moorehead, Pedro Armendáriz and its director Dick Powell, later succumbed to cancer and cancer-related illnesses.

For her contribution to the film industry, Susan Hayward has a star on the Hollywood Walk of Fame at 6251 Hollywood Boulevard.