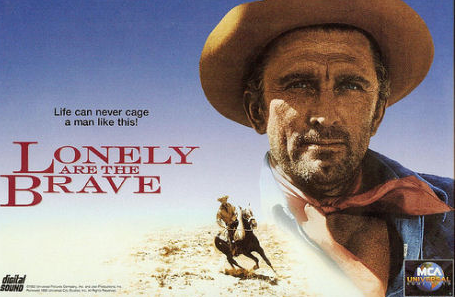 Lonely Are the Brave is a 1962 film adaptation of the Edward Abbey novel The Brave Cowboy. The film was directed by David Miller from a screenplay by Dalton Trumbo.

It stars Kirk Douglas as cowboyJack Burns, Gena Rowlands as his best friend’s wife, and Walter Matthau as a sheriff who sympathizes with Burns but must do his job and chase him down. It also features an early score by composer Jerry Goldsmith. Douglas stated this was his favorite film.

John W. “Jack” Burns works as a roaming ranch hand, much as the cowboys of the old West did, refusing to join mainstream society, underscored by his lack of both a driver’s license and draft card. He has no permanent address — he simply sleeps wherever and whenever he chooses.

As Burns crosses a highway into a town in New Mexico to visit Jerry (Gena Rowlands) the wife of an old friend, his horse Whiskey has a difficult time crossing the road, confused and scared by the traffic. Jerry’s husband, Paul (Michael Kane) has been jailed for giving aid to illegal immigrants. In a conversation with Jerry, Jack expresses his disdain of a society that tells a man where he can or can’t go, what he can or can’t do.

Determined to break Bondi out of jail, Burns decides he needs to get himself arrested. After a violent barroom fight against a one-armed man (Bill Raisch) in which he is forced to use only one arm himself, Burns is arrested. 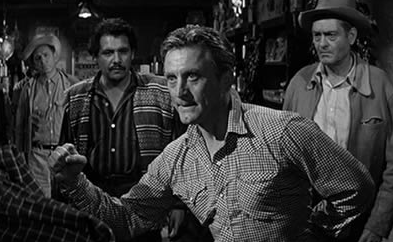 When the police decide to let him go, he deliberately punches a cop to get himself re-arrested. He is immediately sentenced to a year in jail, which allows him to see Bondi, with the intention of helping him escape. The jail is located in a sleepy border town, staffed by bored personnel, occasionally dealing with minor offenses. The Sheriff, Morey Johnson (Walter Matthau), has to compel them to pay attention to their duties at times. During the course of the narrative, the seemingly unrelated progress of a truck carrying toilets, driven by Carroll O’Connor, is inter-cut with the film’s principal events.

Joining Bondi in jail, Burns tries to persuade him to escape. He tells Bondi if he has to spend a year locked up, he’ll likely kill someone. Burns defends Bondi from the attention of sadistic Deputy Sheriff Gutierrez (George Kennedy), who then picks Burns as his next target. During the night the inmates saw through one of the jail’s bars using two hacksaw blades Burns had hidden in his boot. The deputy summons Burns in the middle of the night and beats him. Upon returning to his cell, Burns tries to persuade Bondi to join him in escaping, but Bondi, nearing the end of his sentence, with a family and too much at stake to become a fugitive, decides to remain. Burns breaks out by himself and returns to Bondi’s house, where he picks up his horse and some food from Bondi’s wife. After the jail break, the sheriff learns that Burns served in the military during the Korean War, including seven months in a disciplinary training center for striking a superior officer. He also received a Purple Heart and a Distinguished Service Cross with oak leaf clusters for his valor during battle.

Burns heads for the mountains on horseback with the goal of crossing the border into Mexico. The police mount an extensive search, with Sheriff Johnson and his Deputy Sheriff Harry (William Schallert) following him in a jeep. A military helicopter is brought in, and when the air crew locates Burns, they relay his location to the sheriff. Whiskey is repeatedly spooked by the helicopter, so Burns shoots the tail rotor, damaging it and causing the pilot to lose control and crash land. 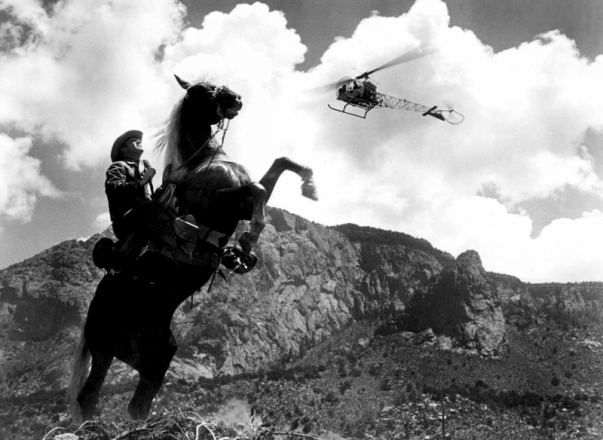 Deputy Gutierrez is also involved in the chase. He comes upon Whiskey, and is preparing to shoot the horse when Burns sneaks up on him, knocking him unconscious with his rifle butt. Burns then leads his horse up impossibly difficult, rocky slopes to escape his pursuers, but the lawmen keep on his trail, forcing him to keep moving. Surrounded on three sides, Burns’ horse refuses at first to climb a steep slope. They finally surmount the crest of the Sandia Mountains and escape to the east, into a broad expanse of heavy timber, with the lawmen on his tail and shooting at him. The sheriff acknowledges Burns has evaded their attempts to capture him, unaware Burns was shot through the ankle during his dash into the forest.

Burns appears to have successfully escaped. Then, late that night as he attempts to cross Highway 66 in Tijeras Canyon during a heavy rainstorm, disaster strikes. Whiskey is spooked, confused by traffic noise and blinded by oncoming headlights. The truck driver hauling the load of toilets, his vision obscured by the rain, strikes Burns and his horse as they are attempting to cross the road. The sheriff arrives at the accident scene, and when asked by the state police if the injured Burns is the man he has been looking for, replies he can’t identify him, because he’s never seen the man he is looking for up close. The viewer is led to believe the sheriff suspects the man to be Burns, but has chosen to not take him into custody. Whiskey, who is seriously hurt, is euthanized. The sheriff and his deputy Harry head home as Burns is transported from the scene in an ambulance. It is left unclear whether he will survive his injuries. The film closes with a shot of Burns’ cowboy hat, swamped by rain in the middle of the highway.

Lonely Are the Brave was made after star Kirk Douglas read Edward Abbey’s novel The Brave Cowboy and insisted that Universal film it as a vehicle for him to star in. Douglas assembled the cast and crew through his production company, Joel Productions, recruiting ex-blacklisted writer Dalton Trumbo, who had written Spartacus several years before, to write the screenplay.

The movie was filmed in the area in and around Albuquerque, New Mexico: the Sandia Mountains, the Manzano Mountains, Tijeras Canyon and Kirtland Air Force Base.

The working title for the film was “The Last Hero,” but the release title of the film was a matter of contention between Douglas, who wanted to call it “The Brave Cowboy,”  and the studio. Douglas wanted the film to open in art houses and build an audience, but Universal chose to market the film as a Western, titling it “Lonely Are the Brave” and opening it widely without any particular support. Despite this, the film developed a cult following, and is often listed as one of the best Westerns ever made. 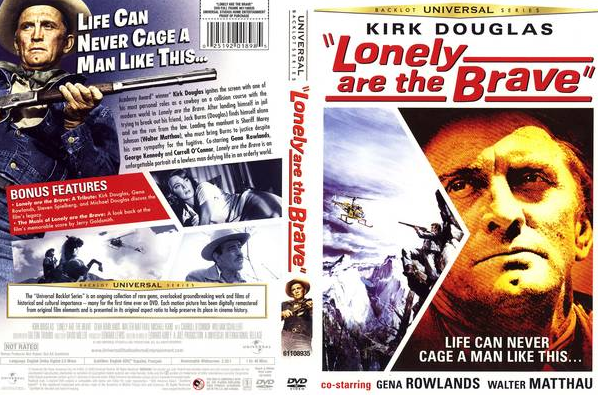 Miller crafted the picture with an eloquent reverence for the stunning Southwestern landscape, complementing the story’s depiction of a lone and principled individual, tested by tragedy and driven by his fiercely independent conscience.

Lonely Are the Brave premiered in Houston on 24 May 1962. President John F. Kennedy watched the movie in the White House in November, 1962. In his memoir Conversations with Kennedy, Ben Bradlee wrote, “Jackie read off the list of what was available, and the President selected the one [film] we had all unanimously voted against, a brutal, sadistic little Western called Lonely Are the Brave.” 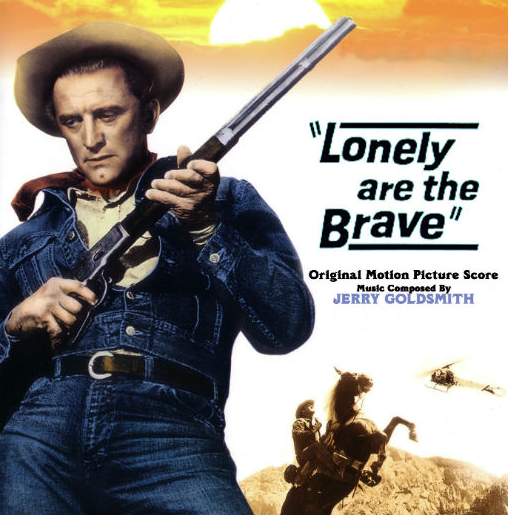 The score to Lonely Are the Brave was composed by Jerry Goldsmith. Goldsmith’s involvement in the picture was the result of a recommendation by veteran composer Alfred Newman who had been impressed with Goldsmith’s score for the television show Thriller, and took it upon himself to recommend Goldsmith to the head of Universal Pictures’ music department, despite having never met him.

Bill Raisch is the one-armed man who fights with Douglas in a barroom brawl scene. The following year Raisch began appearing with David Janssen in the TV series The Fugitive.

Kirk Douglas was nominated for a 1963 BAFTA Award as “Best Foreign Actor” for his work in Lonely Are the Brave, and placed third in the Laurel Awards for “Top Action Performance.” The Motion Picture Sound Editors gave the film a “Golden Reel Award” for “Best Sound Editing” (Waldon O. Watson, Frank H. Wilkinson, James R. Alexander, James Curtis, Arthur B. Smith), in a tie with Mutiny on the Bounty.

Quotes from the Film