Original Tommy’s was opened on May 15, 1946, by Tom Koulax (October 26, 1918 – May 28, 1992), the son of Greek immigrants, on the northeast corner of Beverly and Rampart Boulevards west of downtown Los Angeles. The stand, which still exists today, sold hamburgers and hot dogs topped with chili. At first business was slow, but started to pick up. During the 1960s, the entire lot at this intersection was purchased. Soon after, the northwest corner was acquired for expanded parking and storage of goods. Not long after that, a second service counter occupying the building at the perimeter of the northeast lot was set up. The food was essentially the same from both locations, except for longer lines at the original shack counter, perhaps for nostalgic reasons. 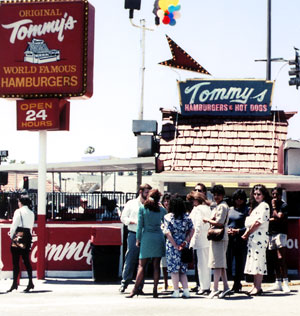 Koulax credited the students, both as workers and customers, from nearby Belmont High School for making Tommy’s a success. He supported the school by placing advertisements in the school newspaper and yearbooks. In his last will and testament, he left a scholarship fund for Belmont.

In the 1970s, Tommy’s initiated a conservative expansion plan, growing from the original location to 30 locations in 2006. Tommy’s did not expand to more than a handful of locations per year. Most Original Tommy’s restaurants are found in the Greater Los Angeles Area. There are also Original Tommy’s restaurants in San Diego, Barstow, Palmdale, La Habra, Riverside, Henderson, Las Vegas, and most recently, in Lake Forest. In recent years several locations have closed.

The company is based in Monrovia, California, after years at Glendale, California, and is run by the late Mr. Koulax’ family. The restaurants are all company-owned, and there are no plans for the company to offer any franchised locations.

A ladle or two of Koulax’ signature chili tops nearly every available menu item, even the breakfast sandwich. Original Tommy’s chili is a mixture of an all-beef chili con carne base, flour, water, and a “secret” blend of spices, and resembles a condiment more than a conventional bowl of chili. The flour-water mixture allows the chili to “set up” and adhere to the burger or fries. 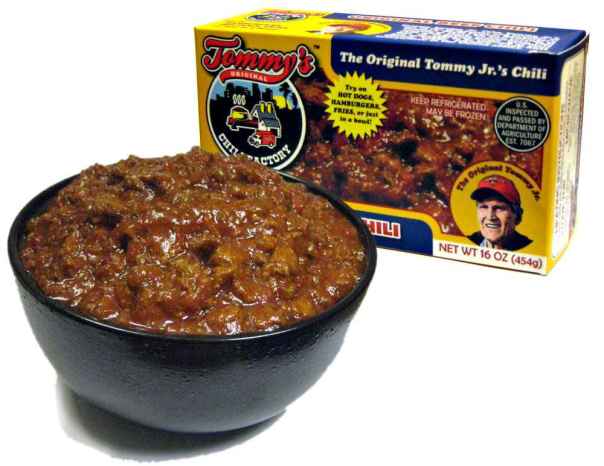 Except for an occasional television commercial and a brief flirtation with radio advertising in the 1990s, Original Tommy’s has relied on word-of-mouth and local newspaper advertising to gain popularity.