The Farmers Market features more than 100 restaurants, grocers and tourist shops, and is located just south of CBS Television City. Unlike most farmers’ markets, which are held only at intervals, the Farmers Market of Los Angeles is a permanent installation and is open seven days a week. The dozens of vendors serve many kinds of food—both American cuisine from local farmers and restaurants and Los Angeles’ variety of local ethnic foods from the many immigrant communities of Los Angeles, with many Latin American and Asian cuisines well represented.

Farmers Market is located at the corner of 3rd Street and Fairfax Avenue in the Fairfax District of Los Angeles, California, USA. It is adjacent to The Grove outdoor shopping mall; an electric-powered streetcar runs between the two sites.

The market is a destination for foodies in search of the market’s ethnic cuisines, as well as its specialty food markets and prepared food stalls. The front of Farmers Market displays a sign saying “Meet Me at Third and Fairfax.” 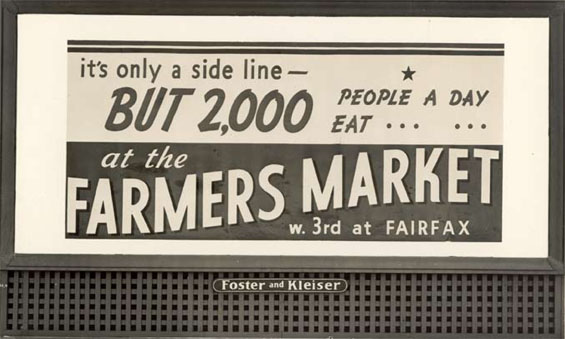 The market started when a dozen nearby farmers would park their trucks on a field to sell their fresh produce to local residents. The cost to rent the space was fifty cents per day.

In 1870, when they moved west from Illinois, Arthur Fremont (A.F.) Gilmore and his partner bought two sizable farms, one of which was the 256-acre (1.04 km2) dairy farm at this corner. Gilmore gained control when the partnership dissolved later.

Gilmore Oil Company replaced the dairy farm when oil was discovered under the land during drilling for water in 1905. Earl Bell (E.B.) Gilmore, son of A.F. Gilmore, took over the family business. The younger Gilmore started midget car racing and brought professional football to Los Angeles. He built Gilmore Field for the Hollywood Stars baseball team, which was owned by Bing Crosby, Barbara Stanwyck, and Cecil B. DeMille.

When CBS Television City opened next door in 1952, the Farmers Market provided those working or visiting that television studio a convenient place to shop or eat.

In the 1970s The Country Kitchen, a restaurant owned and operated by Jack and Eileen Smith (located next to the still-operating Du-par’s), was popular with stars and their fans alike. Mickey Rooney could sometimes be found working behind the counter. Other customers included Elvis Presley, Regis Philbin, Rip Taylor, Mae West, Johnny Carson, and even The Shah of Iran on his visit.

Koning Eizenberg Architecture, Inc. devised a major renovation, expansion, and master plan for the Market in the early 1990s. The project was initiated to provide new retail, office, and services spaces and reconfigure circulation and parking for the historic site.

In July 1934 a contingent of farmers pulled their trucks onto an expanse of empty land at the property known as Gilmore Island at the corner of Third and Fairfax in Los Angeles. They displayed their produce on the tailgates of their vehicles; to their delight customers quickly arrived and parked their cars on a hastily created dirt parking lot in spaces designated with chalk. They strolled among the trucks purchasing fruit, vegetables and flowers.

The atmosphere was casual, the open air commerce enticing, the goods fresh, and the result remarkable. Farmers Market became an instant institution.

With a partner, Arthur Fremont Gilmore purchased two ranches in the Los Angeles vicinity. The purchase inaugurated a string of serendipitous events that not even the far-sighted Gilmore could predict. When Gilmore and his partner elected to dissolve their arrangement, they drew straws—Gilmore’s straw secured 256 acres on which he created a successful dairy farm. A.F. Gilmore had no plans for a world-renowned institution when he moved to Los Angeles from Illinois in 1870. Rather, he was seeking a better life on the promising West Coast. When he married Mary Elizabeth Bell in 1882, the small adobe on the property became the new home for his family.

At the turn of the century, while drilling for water for his herd of dairy cows, A.F. Gilmore hit oil. By 1905, the dairy was gone and the Gilmore Oil Company born.