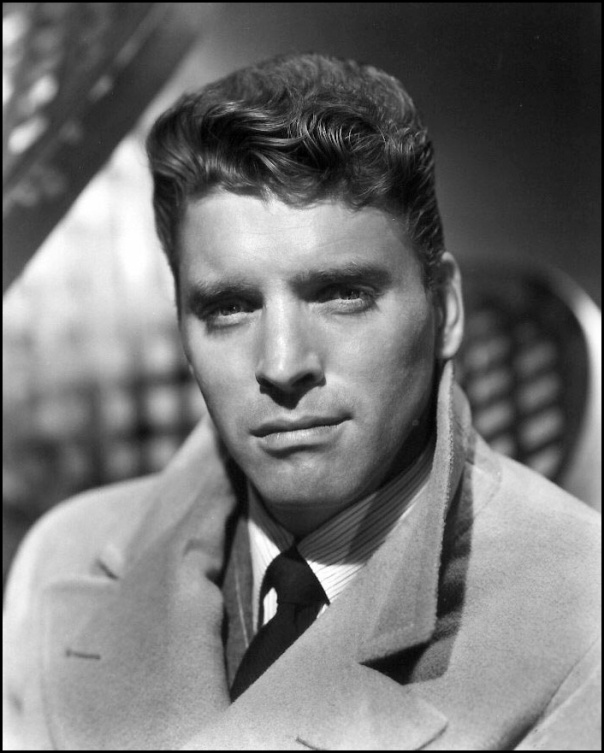 Burton Stephen “Burt” Lancaster (November 2, 1913 – October 20, 1994) was an American film actor noted for his athletic physique, blue eyes and distinctive smile (which he called “The Grin”). After initially building his career on “tough guy” roles Lancaster abandoned his “all-American” image in the late 1950s in favor of more complex and challenging roles, and came to be regarded as one of the best actors of his generation as a result.

Lancaster was nominated four times for Academy Awards and won once—for his work in Elmer Gantry in 1960. He also won a Golden Globe for that performance and BAFTA Awards for The Birdman of Alcatraz (1962) and Atlantic City (1980). His production company, Hecht-Hill-Lancaster, was the most successful and innovative star-driven independent production company in Hollywood of the 1950s, making movies such as Marty (1955), Trapeze (1956), and Sweet Smell of Success (1957).

In 1999, the American Film Institute named Lancaster 19th among the greatest male stars of all time.

Lancaster was born in Manhattan, New York City, at his parents’ home at 209 East 106th Street, between Second and Third Avenues, today the site of Benjamin Franklin Plaza. Lancaster was the son of Elizabeth (née Roberts) and James Henry Lancaster, who was a postman. Both of his parents were Protestants of working-class origin. Lancaster’s maternal grandparents were Northern Irish immigrants to the U.S. from Belfast and descendants of English immigrants to Ireland. The family believed themselves to be related to Frederick Roberts, 1st Earl Roberts. Lancaster grew up in East Harlem and spent much of his time on the streets, where he developed great interest and skill in gymnastics while attending the DeWitt Clinton High School, where he was a basketball star. Before he graduated from DeWitt Clinton, his mother died of a cerebral hemorrhage. Lancaster was accepted into New York University with an athletic scholarship but subsequently dropped out. 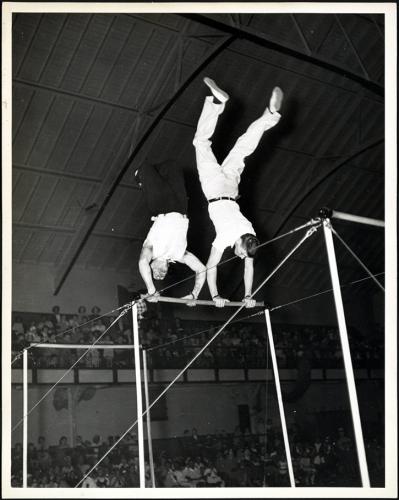 At the age of 19, Lancaster met Nick Cravat, with whom he continued to work throughout his life. Together they learned to act in local theatre productions and circus arts at Union Settlement, one of the city’s oldest settlement houses. They formed the acrobat duo “Lang and Cravat” in the 1930s and soon joined the Kay Brothers circus. However, in 1939, an injury forced Lancaster to give up the profession, with great regret. He then found temporary work until 1942—first as a salesman for Marshall Fields, and then as a singing waiter in various restaurants.

The United States having then entered World War II, Lancaster joined the US Army and performed with the Army’s Twenty-First Special Services Division, one of the military groups organized to follow the troops on the ground and provide USO entertainment to keep up morale. He served with General Mark Clark’s Fifth Army in Italy from 1943–1945.

Though initially unenthusiastic about acting, he returned from service, auditioned for a Broadway play, and was offered a role. Although Harry Brown’s A Sound of Hunting had a run of only three weeks, Lancaster’s performance drew the attention of a Hollywood agent, Harold Hecht, and through him to Hal Wallis, who cast Lancaster in The Killers (1946). (Hecht and Lancaster later formed several production companies in the 1950s to give Lancaster greater creative control.) The tall, muscular actor won significant acclaim and appeared in two more films the following year. Subsequently, he played in a variety of films, especially in dramas, thrillers, and military and adventure films. In two, The Flame and the Arrow and The Crimson Pirate, a friend from his circus years, Nick Cravat, played a key supporting role, and both actors impressed audiences with their acrobatic prowess.

In 1953, Lancaster played one of his best-remembered roles with Deborah Kerr in From Here to Eternity. The American Film Institute acknowledged the iconic status of the scene from that film in which he and Deborah Kerr make love on a Hawaiian beach amid the crashing waves. The organization named it one of “AFI’s top 100 Most Romantic Films” of all time.

Lancaster won the 1960 Academy Award for Best Actor, a Golden Globe Award, and the New York Film Critics Award for his performance in Elmer Gantry.

In 1966, at the age of 52, Lancaster appeared nude in director Frank Perry’s film, The Swimmer.

During the latter part of his career, Lancaster left adventure and acrobatic films behind and portrayed more distinguished characters. This period brought him work on several European productions, with directors such as Luchino Visconti and Bernardo Bertolucci. Lancaster sought demanding roles, and if he liked a part or a director, he was prepared to work for much lower pay than he might have earned elsewhere. He even helped to finance movies whose artistic value he believed in. He also mentored directors such as Sydney Pollack and John Frankenheimer and appeared in several television films. Lancaster’s last film was Field of Dreams (1989). 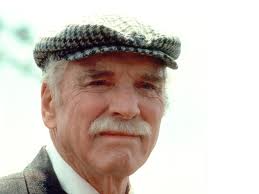 For his contribution to the motion picture industry, Lancaster has a star on the Hollywood Walk of Fame at 6801 Hollywood Boulevard.

Lancaster was an early and successful actor/producer. In 1952, Lancaster co-produced The Crimson Pirate with producer Harold Hecht (who had previously produced three Lancaster films under his own production company Norma Productions; Kiss the Blood Off My Hands (1948), The Flame and the Arrow (1950), and Ten Tall Men (1951)). In 1954, they collaborated again on His Majesty O’Keefe, with Lancaster acting and Hecht producing. The writer for this film was James Hill. The trio started a production company, originally with Hill as a silent partner, under the name “Hecht-Lancaster.” The name was later extended to include all three with “Hecht-Hill-Lancaster.”

In the late 1960s, Lancaster teamed with Roland Kibbee to form “Norlan Productions” and along with “Bristol Films” produce The Scalphunters (1968), Valdez Is Coming (1971), and The Midnight Man (1974).

Lancaster made seven films over the years with Kirk Douglas, including I Walk Alone (1948), Gunfight at the O.K. Corral (1957), The Devil’s Disciple (1959), The List of Adrian Messenger (1963), Seven Days in May (1964), Victory at Entebbe (1976) and Tough Guys (1986), all of which fixed the notion of the pair as something of a team in the public imagination. The connection was firmly cemented by the time Lancaster and Douglas reteamed for their final movie, Tough Guys. Although Douglas was always second-billed under Lancaster in these films, their roles were usually more or less the same size with the exceptions of I Walk Alone, in which Douglas played a villain, and in Seven Days in May, where Douglas’ part was larger than Lancaster’s but not as dramatic.

Lancaster starred in three films with Deborah Kerr; From Here to Eternity, Separate Tables, and The Gypsy Moths.

Finally,  I personally got to watch Burt Lancaster being filmed in a football “kicking” scene in North Hollywood Park in 1950 while on my walk home through the park from junior high school. 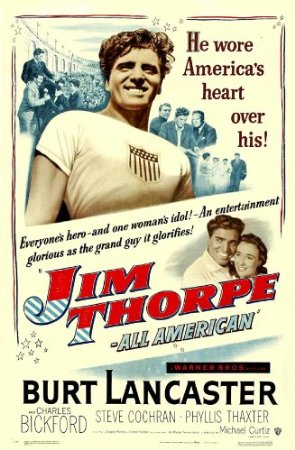 Jim Thorpe – All-American is a 1951 biographical film produced by Warner Bros. and directed by Michael Curtiz, honoring Jim Thorpe, the great Native American athlete who won medals at the 1912 Olympics and distinguished himself in various sports, both in college and on professional teams.

The film starred Burt Lancaster as Thorpe and featured some archival footage of both the 1912 and 1932 Summer Olympics, as well as other footage of the real Thorpe (seen in long shots). Charles Bickford played the famed coach Glenn Scobey “Pop” Warner, who was Thorpe’s longtime mentor. Bickford also narrated the film, which told of Thorpe’s athletic rise and fall, ending on an upbeat note when he was asked by a group of boys to coach them. Phyllis Thaxter portrayed Thorpe’s first wife. Warner Bros. used a number of contract players in the film, as well as a few Native American actors.