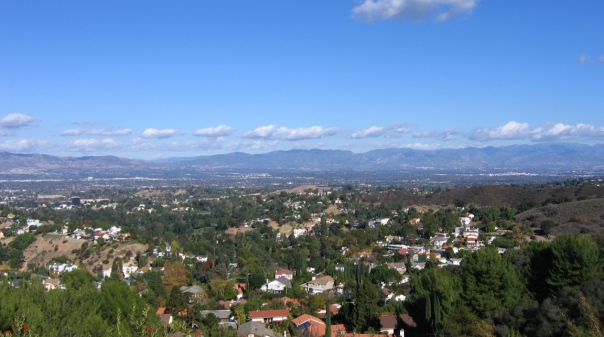 The San Fernando Valley (locally known as “The Valley“) is an urbanized valley located in the Los Angeles metropolitan area of southern California, United States, defined by the mountains of the Transverse Ranges circling it. Home to 1.76 million people, it lies north of the larger and more populous Los Angeles Basin.

Nearly two thirds of the Valley’s land area is part of the city of Los Angeles. The other incorporated cities in the valley are Burbank, Glendale, San Fernando, Hidden Hills and Calabasas.

The Los Angeles River begins at the confluence of Calabasas Creek (Arroyo Calabasas) and Bell Creek (Escorpión Creek) at Canoga Park High School beside Vanowen Street in Canoga Park. Those creeks’ headwaters are in the Santa Monica Calabasas foothills, the Simi Hills’ Hidden Hills, Santa Susana Field Laboratory, and Santa Susana Pass Park lands. The River flows eastward along the southern regions of the Valley. One of the river’s two unpaved sections can be found at the Sepulveda Basin. A seasonal river, the Tujunga Wash, drains much of the western facing San Gabriel Mountains and passes into and then through the Hansen Dam Recreation Center in Lake View Terrace. It flows south along the Verdugo Mountains through the eastern communities of the Valley to join the Los Angeles River in Studio City. Other notable tributaries of the River include Dayton Creek, Caballero Creek, Bull Creek, Pacoima Wash, and Verdugo Wash. The elevation of the floor of the valley varies from about 600 ft (180 m) to 1,200 ft (370 m) above sea level.

Most of the San Fernando Valley is within the jurisdiction of the city of Los Angeles, although a few other incorporated cities are located within the Valley as well: Burbank and Glendale are in the southeast corner of the Valley, Hidden Hills and Calabasas are in the southwest corner, and San Fernando, which is completely surrounded by Los Angeles, is in the northeast valley. Universal City, an enclave in the southern part of the Valley, is unincorporated land housing the Universal Studios filming lot. Mulholland Drive, which runs along the ridgeline of the Santa Monica Mountains, marks the boundary between the Valley and the communities of Hollywood and the Los Angeles Westside.

The Tongva, later known as the Gabrieleño Mission Indians after colonization, and the Tataviam to the north and Chumash to the west, had lived and thrived in the Valley and its arroyos for over 8,000 years. They had numerous settlements, and trading and hunting camps, before the Spanish arrived in 1769 to settle in the Valley.

The Treaty of Cahuenga, ending the Mexican-American War fighting in Alta California, was signed in 1847 by Californios and Americans at Campo de Cahuenga, the Verdugo Family adobe at the entrance to the Cahuenga Pass in the southeast San Fernando Valley (North Hollywood). The 1848 Treaty of Guadalupe Hidalgo ended the entire war.

The valley’s climate is not as some describe, a desert, and originally was naturally a “temperate grasslands, savannas, and shrub lands biome” of grassland, oak savanna, and chaparral shrub forest types of plant community habitats, along with lush riparian plants along the river, creeks, and springs. In this Mediterranean climate, post-1790s European agriculture for the mission’s support consisted of grapes, figs, olives, and general garden crops.[7] In 1874 dry wheat farming was introduced by J. B. Lankershim and Isaac Van Nuys and became very productive for their San Fernando Homestead Association that owned the southern half of the Valley. In 1876 they sent the very first wheat shipment from both San Pedro Harbor and from the United States to Europe.

Through late 19th century court decisions, Los Angeles had won the rights to all surface flow water atop an aquifer groundwater beneath the Valley, without it being within the city limits. San Fernando Valley farmers offered to buy the surplus aqueduct water, but the federal legislation that enabled the construction of the aqueduct prohibited Los Angeles from selling the water outside of the city limits. This induced several independent towns surrounding Los Angeles to vote on and approve annexation to the city so they could connect to the municipal water system. These rural areas became part of Los Angeles in 1915. Concurrently and perhaps pre-aware, the Los Angeles Suburban Homes Company, a syndicate led by Harry Chandler, Hobart Johnstone Whitley, president of the company, James B. Lankershim, and Isaac Van Nuys, extended the Pacific Electric Railway (Red Cars) through the Valley to Owensmouth (now Canoga Park and West Hills) and laid out plans for roads and the towns of Lankershim (now Toluca Lake), Van Nuys, Marian (now Reseda) and Owensmouth. The rural areas became annexed by Los Angeles in 1915. The growing towns voted for annexation – for example: Owensmouth (Canoga Park) in 1917, Laurel Canyon and Lankershim in 1923, Sunland in 1926, La Tuna Canyon in 1926, and the incorporated city of Tujunga in 1932 – more than doubling the size of the city. A fictionalized story based on these events is told in the 1974 film Chinatown.

The Aqueduct water shifted farming from wheat to irrigated crops such as corn, beans, squash, and cotton; orchards of apricots, persimmons, and walnuts; and major citrus groves of oranges and lemons. They continued until the next increment of development converted land use, with post-war suburbanization leaving only a few enclaves, such as the ‘open air museum’ groves at the Orcutt Ranch Park and CSUN campus.

Also the advent of three new industries in the early 20th century – motion pictures, automobiles, and aircraft – spurred urbanization and population growth. World War II production and the subsequent postwar boom accelerated this growth so that by 1960, the valley had a population of well over one million. Los Angeles continued to consolidate its territories in the San Fernando Valley by annexing the former Rancho El Escorpión for Canoga Park-West Hills in 1959, and the huge historic “Porter Ranch” at the foot of the Santa Susana Mountains for the new planned developments in Porter Ranch in 1965. The additions expanded the Los Angeles portion of San Fernando Valley from the original 169 square miles (438 km) to 224 square miles (580 km) today.

Six Valley cities incorporated independently from Los Angeles: Glendale in 1906, Burbank and San Fernando in 1911, Hidden Hills in 1961, and Calabasas in 1991. Universal City is an unincorporated enclave that is home to Universal Studios theme park and Universal CityWalk. Other unincorporated areas in the Valley are Bell Canyon.

The 1994 Northridge earthquake, struck on January 17 and measured 6.7 on the Richter Scale and produced the largest ground motions ever recorded in an urban environment and caused the greatest damage in the United States since the 1906 San Francisco. Its epicenter was located between Arminta St. and Ingomar St. just east of Reseda Blvd. under the community of Reseda. The death toll was 57, and more than 1,500 people were seriously injured. A few days after the earthquake, 9,000 homes and businesses were still without electricity; 20,000 were without gas; and more than 48,500 had little or no water. About 12,500 structures were moderately to severely damaged, which left thousands of people temporarily homeless. Of the 66,546 buildings inspected, 6% were severely damaged (red tagged) and 17% were moderately damaged (yellow tagged). In addition, damage to several major freeways serving Los Angeles choked the traffic system in the days following the earthquake. Major freeway damage occurred as far away as 25 miles (40 km) from the epicenter. Collapses and other severe damage forced closure of portions of 11 major roads to downtown Los Angeles.

This was the second time in 23 years that the San Fernando Valley had been affected by a strong earthquake. On February 9, 1971, a magnitude 6.6 event struck about 20 miles (32 km) northeast of the epicenter of the 1994 event. The 1971 earthquake caused 58 fatalities and about 2,000 injuries. At the time, the 1971 earthquake had been the most destructive event to affect greater Los Angeles since the magnitude 6.3 Long Beach earthquake of 1933.

The Valley is home to numerous companies, the most well known of which work in motion pictures, music recording, and television production. The former movie ranches were branches of original studios now consisting of CBS Studio Center, NBCUniversal, The Walt Disney Company (and its ABC television network), and Warner Bros.

The Valley was previously known for advances in aerospace technology and nuclear research by companies such as Lockheed, Rocketdyne and its Santa Susana Field Laboratory, Atomics International, Litton Industries, Marquardt, and TRW’s predecessor Thompson Ramo Wooldridge.

Metrolink commuter rail has two Valley lines, the Antelope Valley Line and Ventura County Line, connect the Valley and beyond to downtown Los Angeles and south, becoming one line at the Burbank station.

The California High-Speed Rail Authority is planning two stations in the Valley, one in downtown Burbank and the other in Sylmar with an initial section of the railroad possibly opening in 2020.

The Valley’s two major airports are Bob Hope Airport and the Van Nuys Airport. The Van Nuys – Airport FlyAway Terminal provides non-stop scheduled shuttle service to LAX and back to the Valley, with parking.

Many neighborhoods of Los Angeles in the San Fernando Valley have ‘seceded’ from one another in the form of renaming and reforming known community boundaries. Groups are motivated by the desire to disassociate themselves from undesirable connotations that some communities have inherited and, in the process, increase property values. Lake Balboa broke away from Van Nuys. Valley Village separated from North Hollywood. Valley Glen included portions of both Van Nuys and North Hollywood. West Hills and Winnetka separated from Canoga Park. Porter Ranch seceded from Northridge. Arleta broke off from Pacoima but failed to establish its own ZIP code. The new separatist districts are so in name only; none of them gained any governmental authority, and they remain districts within the City of Los Angeles, merely with new names.

According to the 2010 San Fernando Valley U.S. Census report, the population of the San Fernando Valley is 1.77 million. Of the population 41.1% were non-Hispanic white, 42.0% were Hispanic or Latino, 3.8% were African Americans and 10.7% were Asian. The largest cities located entirely in the valley are Glendale and Burbank. The most populous districts of Los Angeles in the valley are North Hollywood and Van Nuys. Each of the two cities and the two districts named has more than 100,000 residents. Despite the San Fernando Valley’s reputation for sprawling, low-density development, the valley communities of Panorama City, North Hollywood, Van Nuys, Reseda, Canoga Park, and Northridge, all in Los Angeles, have numerous apartment complexes and contain some of the densest census tracts in Los Angeles.

Latinos and non-Hispanic whites are nearly even in numbers. In general, communities in the northeastern and central parts of the Valley have the highest concentration of Latinos. Non-Hispanic Whites live mainly in the communities along the region’s mountain rim and in the northwestern, western, southwestern, southern, and southeastern sections of the valley, including the Shadow Hills neighborhood.

Asian Americans make up 10% of the population and live throughout the valley, but are most numerous in the city of Glendale and the Los Angeles communities of Chatsworth, Panorama City, Northridge, Porter Ranch and Granada Hills. Another large ethnic element of the populace is the Iranian community with 200,000 people living mainly in west San Fernando Valley such as Tarzana, Calabasas, Woodland Hills, Encino, & Sherman Oaks. The valley is also home to a large Jewish community, with a large part of its population in the North Hollywood and Valley Village areas. The city of Glendale has a large Armenian community. African Americans compose 3.8% of the Valley’s population, living mainly in the Los Angeles sections of Lake View Terrace, Pacoima, Reseda, Valley Village, Van Nuys, and Northridge.

The Pacoima district of Los Angeles is widely known in the region as a hub of suburban blight. Other San Fernando Valley communities, such as the Los Angeles sections of Mission Hills, Arleta, and Northridge, have poverty rates well below the regional average.

Many wealthy families live in the hills south of Ventura Boulevard.